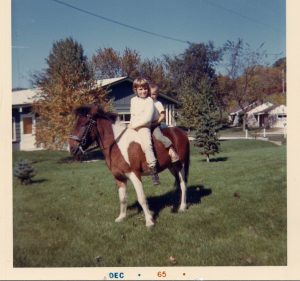 Fairly early in our move to Greenwald Coulee, the Fishers fenced in their adjacent lot and bought a palomino Shetland pony, named Pal. The neighbor kids flocked to the Fishers’ house to fawn over Pal.

Our girls, especially Cindy, became enchanted with the idea of us having a pony, too. That triggered us to consider if we could. (The owners of the abandoned farm across the road from our house boarded horses, so we could keep a pony there.) Memories of my own childhood riding my pony, Betty, from farm to farm made me want that for our kids.

My dad and Aunt Helen helped us find a pinto Shetland colt that we named Mr. Sox (because he had white ankles). A typical pony, Mr. Sox had a stubborn streak. But Betty had taught me how to manage stubborn ponies:  you must show the pony who is boss! I helped the girls learn how to manage Sox, and in no time Cindy and Barb both figured out how control him. Generally, Jean rode behind one of them. But eventually, she also got the hang of ponies and grew fond of Sox.

Soon, other neighborhood families bought ponies too. Our neighbors across the road, the Palens, bought a dapple-grey Shetland they named Thunder. As an unneutered adult horse, Thunder was true to his name—feisty and a little wild. Then Boehligs bought a black Welsh pony (a slightly larger breed) who they named Peanuts.

None of the other moms knew anything about horses, so I stepped in and took charge. I taught all the girls how to build trust with their ponies. Then I showed them how to put on the harnesses and the saddles. Finally, I taught them how to mount and dismount. They learned how to stroke the ponies’ soft noses, curry their manes, and brush their coats. I helped them check the ponies’ hoofs for rocks and remove them, if necessary. The girls loved to feed them treats—like sugar, apples, and carrots—out of their hands. We also sprayed a repellant to keep the flies from driving the ponies crazy on those hot summer days.

The girl “pack” loved charging around on the ponies. Usually, the four ponies carried eight girls. They chased each other, roamed the pasture, or stampeded the boys. Half the time they skipped the saddles and rode bareback—sometimes wearing nothing more than a pair of cut-offs.

One day Jean was carrying a heavy bucket of water across the road to the ponies. Two neighbor boys came charging down the road riding double on a bicycle. The boy riding in front said, “Let’s run over that Storlie kid!” They plowed into her. I saw her topple over and ran into the road to pick her up. She was out cold, so I carried her to our bedroom. When she woke up, Jean was confused to be laying on our bed. I was furious that those bullies did that to her. I called their moms to report their naughty behavior. After that I didn’t let them play in our yard again.

One of the girls’ most exciting adventures involved riding the ponies to the newly opened McDonald’s about a mile and a half from our house. It required riding on city streets, so we told them “no” when they first asked. But after their incessant begging, we finally caved in. We plotted a route and made sure they knew their way. They rode out of our neighborhood to the elementary school, then followed a dirt path along a creek. That took them to the city limits. McDonalds was a few city-blocks away from there. They thought they were so clever to tie the ponies to the bike rack so they could go inside to buy 17-cent burgers with fries. Their adventure concluded without a hitch, but they had the satisfaction of safely roaming a long way from home.

The girls learned about responsibility from their “pony days,” as well as a few lessons that hurt a little. There were the inevitable spills and being bucked off by a stubborn pony. One time Sox got spooked by a bull snake and bucked while Cindy was riding. She held on for dear life while I ran out to kill the snake with a shovel. As the news of my grisly deed spread through the neighborhood, our girls thought I was heroic.

They managed the necessary duties like feeding and changing the straw for the horses. During the spring, summer, and fall, the horses grazed in the pasture and foraged on their own. But in the dead of winter, the horses sheltered in a barn with no electricity. Cindy and Georgeanne Bohlig diligently followed through with their promises to care for the family ponies. They trudged through the snow-covered foot path up to the barn (~half mile long) every morning, all winter to feed them oats and spread-out hay. Cindy’s devotion to Mr. Sox reminded me about how I learned to care for Betty.

Sometimes the ponies didn’t return the girls’ doting love.  Biting was a particular pony problem. First, Thunder Palen bit his owner, Lisa. She bit him back (Lisa was one of the tough kids). Another time, Cindy prepared an elaborate birthday treat for Mr. Sox. She removed the core from an apple and filled it with sugar, then topped the core with a carrot stick as a plug. As she walked up to Sox, he turned around and bit her shoulder. She didn’t bite him back, but she did toss his birthday gift to the ground. He had to eat his treat from the dirt, rather than out of her loving palm.

Cindy and her friends slaved over their Girl Scout merit badges in the “pet” category. She wore that badge with glowing pride. All her hard work and responsibility made me proud of her. Cindy also saved her money to buy a saddle for Sox. It was her first major purchase, and we helped her find a nice, used saddle that fit.

We had Mr. Sox for about four years. When Cindy started junior high school (7th grade), the early morning treks to the barn became challenging for her. In the winter, her bus arrived before dawn, and she didn’t get them home until it was getting dark. Barb picked up the Sox responsibilities that winter. But as the other families found new homes for their ponies, Barb trudged alone through the snow to feed and care for Sox. (Jean, the back-seat rider, also lost interest in Sox.) 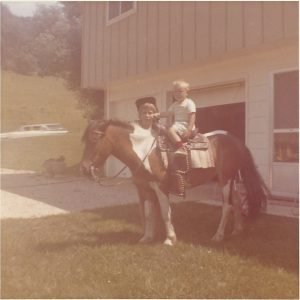 We cut a deal with our dentist, who owned a hobby farm, to swap Mr. Sox for a beautiful, gentle golden retriever, Ginger. We visited Sox a few times. But eventually, our pony adventures faded into distant memories. Ginger gave us many years of companionship, becoming a fixture in our exuberant family life.

More than anything, I think we gave the kids a great learning experience through Mr. Sox. To own, care for, and shoulder some of the expense of pony ownership, they learned devotion to and responsibility for another living being. Cindy also learned the value of savings and hard work to pursue what you want. Looking back on the pony project, I think it was one of the best lessons we taught.