Life in the Neighborhood 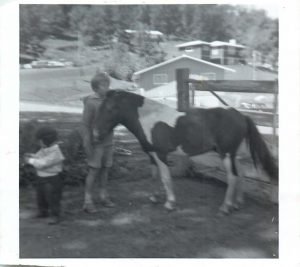 In no time, our yard became a gathering place for the neighborhood kids. We lived across the street from the gate to the pasture where people boarded their horses at the abandoned farm. That area was a big attraction for the kids. You can see our house just beyond the pasture gate in the picture.

Three families had two daughters the same age as Cindy and Jean. And even more girls and boys close to their ages charged around our neighborhood. Our doorbell rang constantly! Sometimes that drove me crazy.

What really annoyed me was when they came in and out, tracking in dirt and slamming doors. Getting them geared up for snow play was an ordeal. By the time I got the last one dressed, the first one wanted to come back in! So, I put my foot down and closed the revolving door.

I made them stay outside for 15 minutes. Soon they got swept up with outdoor activities, like sledding, building snow forts, and tromping around. Fifteen minutes turned into hours. That was a peaceful respite. I enjoyed watching them play from the window while I did my housework.

The neighborhood kids ran in a pack. Cindy’s tomboy spirit fit right in with them. Her girlfriends were the oldest of a large group of kids. They organized their younger siblings to play team sports and games, like softball. Two captains took turns selecting the members of their teams. Jean hated this process because she was usually one of the last kids to be picked. Barb was right behind Cindy as a tomboy leader.

Those two were just like me, but Jean had a hard time keeping up with the tomboys. She did not enjoy the competitive games and their rough-and-tumble antics. Instead, Jean sought other girls who liked to play with Barbie dolls and build forts. Her friends’ parents welcomed her because she was so quiet.

All the kids explored the pasture and woods around our house. They built forts all over the place—in the pine grove, the prairie terrace, the abandoned farmhouse, or the bluffs and woods. Some of these spaces took on more creative names. For example, the horses slept in a wooded glen at the top of the valley, which became “The Bedroom.”

Their creativity was amusing, but I got annoyed when they tried to take blankets, towels, and supplies from the house. And Jack got furious if they used (and didn’t return) his tools.

I also put my foot down about being home on time for dinner. The Town of Shelby Fire Department sounded an alarm every day at 5:00 pm. The “Five O’Clock Whistle” was the kids signal to head home for dinner. If they had wandered too far and came home late, I was not happy. We sat down to eat promptly at 5:30.

This picture also foreshadows my next story. Stay tuned ….