The Landmans Move Next Door 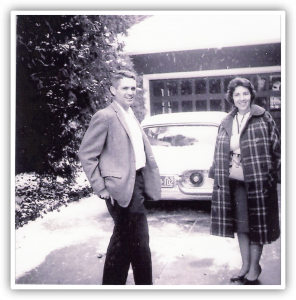 A young couple, Bill and Jane Landman, moved into the house next door a couple months after us. I made some welcome brownies, which Jack delivered to them. The next day, Jane stopped by to thank me. And we became friends right away.

I learned that Jane was an elementary special education teacher, and Bill was an engineer at Trane Company. She was so charming and fashionable. And they were a dashing and charismatic pair!

Landman’s had a great view of our house and yard from their family room. Bill likes to joke that even though they had a nice big TV, they didn’t need to turn it on. Watching the Storlies provided much more entertainment.

He tells about the time when Jack—being the absent-minded professor—backed into our garage door, forgetting to open it first. After leaving the garage stall without a door all winter, we finally replaced it. A few days later, Jack forgot we had a new door and backed into it again. Bill never let Jack forget that mistake!

Jane frequently invited us over for happy hour on Friday nights to celebrate the end of the week. Pretty soon, we fell into a ritual of Friday Night Margaritas and Cocktails. One time, Bill had put some steaks on the grill in their driveway and rejoined us in the family room. We couldn’t figure out why Johnny kept waving his arms wildly, trying to get our attention. When Bill went out to see why Johnny was so excited, the steaks were going up in flames and burnt to cinders. We pivoted our plans and went out for fish fry instead.

Neighborhood kids loved to hang around the Landman’s yard. Bill was often out in their driveway puttering with projects. He always had a pleasant word for the kids and chuckled about their various shenanigans. Their nephews, Kent and Scott Edwards, frequently joined the pack.

The pictures below show kids gathered around the large culverts that ran under our driveways. I don’t know why in god’s sake the kids were fascinated with the culverts! They liked to holler inside to hear their echos. Trampling back and forth from culvert to culvert, they mucked around in the muddy mess. As the storm drainage system for the coulee, these culverts sometimes became a dangerous a torrent of water. But it was hard to discipline the kids to stay out of them.

Landmans had a speed boat that they moored in a marina on the Mississippi River. They frequently invited us to go boating with them. We’d cruise around a while, then find a sandbar to set up for the afternoon. Except for the swift river current, these outings reminded us of fun on the Eau Claire Lakes. We needed to keep a close eye on the kids, so they didn’t wander out too deep and get swept away. Bill took charge of water play and kept the kids safe—and entertained.

Meeting the Landmans that spring was the beginning of another lifelong friendship. Have you noticed that the husbands of our three close friends are named Bill? 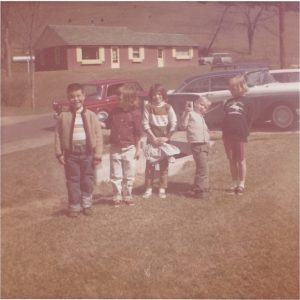 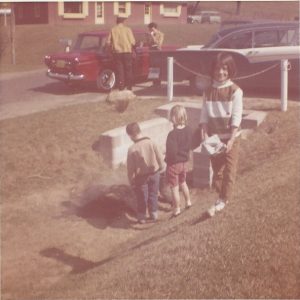 Neighborhood kids in front of Landman’s