Moving into Our New House 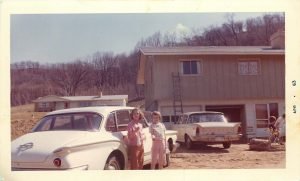 Cindy and Carol Fisher in front of new house.

We moved to Greenwald Coulee late January of 1963. Cindy and Jean transferred to State Road School in the middle of their third and first grade years. Both girls adjusted well and started to make friends with the neighbor kids.

Since they were already friends with Carol and Sue Fisher, it was easy for them to meet the many girls their age who lived in the neighborhood. Soon all three girls were running around with a big pack of kids. And our yard became a popular place for them gather to sled down the hill on our side yard.

We were really thrilled with various modern features and gadgets in our house. (Many now see normal, but back then were novel.)  The attached garage allowed me to carry groceries right into the house. The laundry chute that delivered clothes from the upstairs to the basement also saved me a lot of steps. I trained the kids to put their dirty clothes into the chute. Unless the chute got clogged, it was a smooth operation.

We had a whole-house intercom installed, which (in theory) allowed us to communicate from one room to another. The kids thought we were like the Jetsons and loved to play around with it. In reality, it was too staticky became more of a toy than a utilitarian device.

But the two sinks in the upstairs family bathroom worked out well. They allowed all four kids to brush their teeth at once (two kids per sink). Also, the pass-through counter and snack bar between the kitchen and dining area allowed me to prepare breakfast and sack lunches in the kitchen, then pass them across the counter to kids on the other side.

Our basement included a full-size recreation room for TV and kids’ toys. I instituted a “no toys or games” rule for the upstairs living room. Jack and I liked to retreat in this kid-free zone to read the paper and unwind at the end of the day.

When the snow melted, we faced a big muddy mess until our lawn could get established and our driveway installed. I was a nervous wreck trying to keep the new floors clean with everyone tracking mud in and out all the time.

Johnny was at the age where he put everything in his mouth, including dirt. One day Jack was chatting with Arnie Halmrast, one of our new neighbors. Arnie observed, “That kid really likes dirt.” Jack looked down at Johnny, whose mouth was full of mud! I was so relieved when we got passed that messy stage, when I no longer had to wash the floors every day.

Jack and I threw ourselves into yard work and landscaping projects. But we were short on money. (We had also bought property on Lower Eau Claire Lake in fall 1962.) So, Jack suggested that we economize by only buying half the amount of sod needed to cover the hillside. He laid the sod in horizontal stripes across the hillside and planted grass seed in between. It looked very odd. But Jack insisted that the sod would prevent the seed from washing downhill, and the seed would fill in overtime.

In reality, it took many years for the seed and sod to look uniform. I’m not sure it was the best decision. Anyway, the bumps gave the sledders an adventurous ride down the hill. (See the striped effect in the background of the picture of Jean and Johnny in the front yard.)

Once the yard was established, we built hillside rock gardens where I planted perennials from my mom’s flower gardens. I especially enjoyed seeing her pink peonies bloom each June. We also planted various fruit trees along with a hedge of poplars to provide shade and privacy. My large vegetable garden yielded tomatoes, green beans, cucumbers, lettuce, radishes, and more. Our neighbors thought I had a green thumb.

Jack and I also liked to lounge on our deck in the back. Over the next 25 years, we watched the trees mature and the space transform from a vacant lot of prairie grass to a garden sanctuary.

It sure was exciting to move into a new, modern house, designed to fit our family’s needs. Plus, working with the land brought us back to our farming roots. 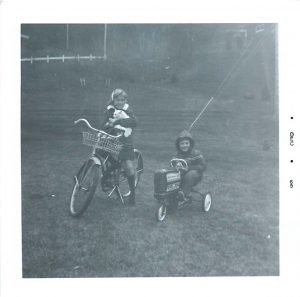 Jean on bike and Johnny on tractor in front yard 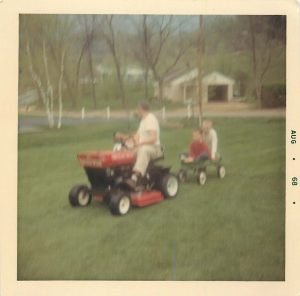 Johnny helping Jack mow. Jack was happy to get a riding lawnmower. 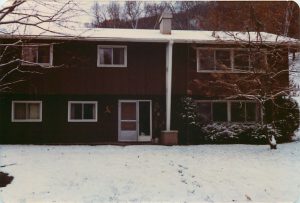 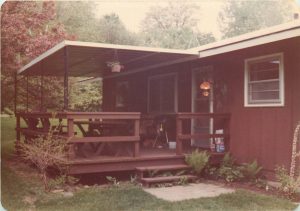