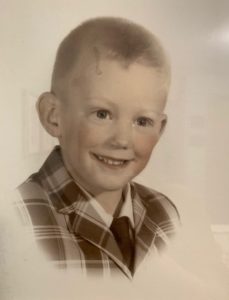 Barb’s fourth birthday was an exciting day for our family—our son, John Jr. (Johnny) was born. Just as I pulled Barb’s birthday cake from the oven, my labor began. I called Georgene, who swept in to help me out. Jack came and took me to the hospital. Georgene decorated Barb’s birthday cake and spent the day with her. She tried to make Barb feel special. Cindy recalls that after Barb blew out her candles that evening, Jack let the girls eat their cake in the TV room and watch TV. This was a treat that we very rarely allowed.

I gave birth in the old Grandview Hospital on Main Street, a stately brick building. Hospital policy did not allow children into the maternity ward. So, Jack would drive the girls over and park on the street directly in front of the hospital. I waved to them out my window. They waved back, honked the horn, and hung their heads out the car windows to greet me. Since “Window on Main Street” was popular on TV that year, they like to call it my “window on Main Street.” 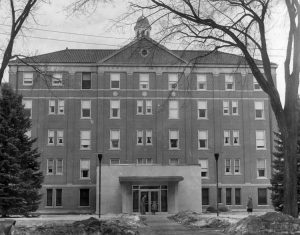 Johnny was a plump mild tempered little baby, and the apple of everyone’s eyes.  All three girls loved playing patty cake and other games with him. They were really good at entertaining him and helping me with his care.  Because he was born on Barb’s birthday, she declared, “He’s mine!”

After John was born, our house on 10th Street began to feel small. Initially, we kept the baby crib in our small bedroom. But once he got a bit older, we moved the crib into the girls’ bedroom. As I described in an earlier episode, it was a large, airy room well-lit by two large dormer windows. But even this large room became cramped with the crib. And it wasn’t a great long-term solution. Also, we desired a bigger yard and a neighborhood with woods. We imagined raising our family in the countryside with less traffic. We began to take Sunday afternoon drives after church to look at new houses. Rain or shine, we loved those lazy drives, dreaming of one day buying one of the many houses that caught our fancy.

Our friends the Fishers moved to a newly developed suburb just outside the city limits. One of the many new neighborhoods that cropped up among the bluffs and valleys south of town, Greenwald Coulee was a bucolic setting. Sometimes, we dropped Cindy and Jean off to play with the Fisher girls instead of making them drive around with us. They loved playing in the woods, climbing the bluffs, and making paths and hideouts through long grass in a large vacant lot not far from Fisher’s house.

When a “for sale” sign popped up on that empty lot, they begged us to look at it. Through that twist of fate, we ended up buying this bowl-shaped, prairie lot.  Much of it was steeply sloped but it had a tangled crop of trees in one corner. The girls named this tiny clump of forest “The Jungle.” 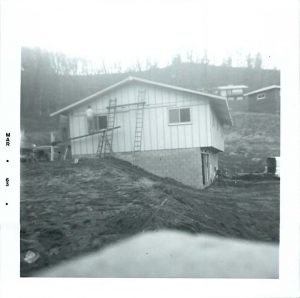 Construction of House In Greenwald Coulee

Located at the edge of the subdivision, a road wound around our lot, curving steeply uphill. Directly across the road, horses and ponies roamed a large, fenced-in pasture. On the other side of the gate, a narrow lane led to an abandoned farmhouse, barn, and outer buildings. Nestled at the foot of steep bluffs and forested hillsides, I imagined that this charming farm was once a prosperous operation. It brought back my memories of growing up on the farm. We knew we’d found the right setting for raising our family. Jack and I plunged into the process of transforming the vacant lot into our dream house.

More to come on that saga. Meanwhile, our house on 10th Street sold before construction was completed. So, we found a tiny, second-story apartment to rent for a few months. I remember the narrow, creaking wooden staircase and the peeling wall pain. But despite these cramped quarters, it was a joyful time. I was busy caring for our bubbly baby boy. And excited about our new house, we made regular visits to the construction site. Time flew by as our dream became reality.

Not only were we moving into a brand-new house, but we would also live closer to the Schmidts. Soon morning coffee with Georgene would be only minutes away.