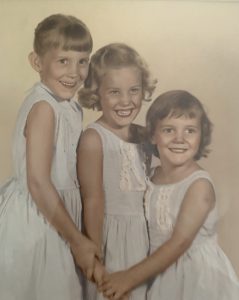 It turned out that my relief was short-lived. When the next summer rolled around, Jack accepted a second NSF fellowship, this time at Emory University in Atlanta. Though my memories of Atlanta have faded, I still have a letter I wrote home to my parents that my mom saved and returned to me. In it, I confided my anxiety about living in a place that felt so alien.

The letter she saved brings back my first impressions of the city. First, we saw many impoverished black families living in rickety shacks that lined the highway leading to Atlanta. When we stopped to fill up with gas, Jack noticed that the gas station attendant refused to serve a black family who pulled in behind us. Cindy kept pestering us to explain what had happened when the attendant turned them away. How do you explain the Jim Crow laws to a seven-year-old?

1960s Atlanta was also a big, overwhelming city. For someone who’d grown up in a small-town, rural area, it was intimidating. When we entered one of Atlanta’s new freeways for the first time, we got lost in a cloverleaf and circled a few times before figuring out how to exit. Hot, sticky, and rumpled—and a little shaken up—we finally pulled up to our summer home. But I opened the car door to a blast of heat that made Iowa City’s heat waves seem like nothing.

We rented a house from a professor at Emory who was on sabbatical. It was a nice bungalow, not far from Emory. Close to Midtown Atlanta, we could walk to a trolley car from our house—Cindy was enamored with it. The house was quaint, tidy, and nice enough. No air conditioning, so I couldn’t escape the brutal heat and humidity. The girls and I walked to a neighborhood swimming pool every day, which was a fun reprieve.

I also signed the girls up for Vacation Bible School so I could have a little free time to do my chores. They came home singing “Rocka Ma Soul in the Bosom of Abraham.” They didn’t sing songs like that at Grace Lutheran. Barb even belted it out with a southern accent!

Another bright spot arrived with a package from Aunt Helen. It contained a set of blue mother-daughter sundresses. The girls were at very cute ages and looked adorable in the dresses. I knew Helen and Mom would love to see a picture of them all dressed up. So, I searched the Yellow Pages to find a photography studio. I bathed and dressed the girls, fixed their hair, and loaded them in the car . That was the easy part! I hadn’t considered the distance to the studio and struggled to follow the map. I made several wrong turns and got lost.

By the time we arrived at the studio, the girls were fussy—and I was a nervous wreck! Despite our frayed nerves, the picture turned out to be one of my favorites. It has hung in my bedroom ever since. Whenever I look at, I’m reminded of our adventurous summer in Atlanta.

When it was time to return to Wisconsin, we packed up our household goods to ship by train. Then we loaded up our trusty station wagon but had to make room for a little black, stray kitten we adopted on one of our daily trips to the pool. The girls named him Midnight.

At summer’s end, we were anxious to get back to La Crosse, so we drove straight home—that trip was uneventful, except for Cindy’s bouts of car sickness. But when we unpacked the household items we shipped by train, we discovered that everything was covered with mildew and rust! What a mess! But most of it was salvageable.

Jean’s beloved baby doll, Marianne, emerged covered in black spots from head to toe. I must admit, the doll looked pretty creepy! I removed the mildew with a little bleach but had to cut Marianne’s hair. For years, Jean kept asking me to explain why Marianne had bald spots. Oh well, she still adored that doll.

Atlanta was our last major family move. As much as I supported Jack’s ambitions, our family continued to grow, and it was no longer feasible to uproot and move somewhere different every summer. I’d had my fill for the time being of travel and adventure, and just wanted to be home. But I didn’t want to pressure Jack to give up on pursuing his dreams. He went alone on two more summer fellowships, one in Madison and another in Louisiana.

One of those led his professional life in a direction he had not imagined … But that’s another story.