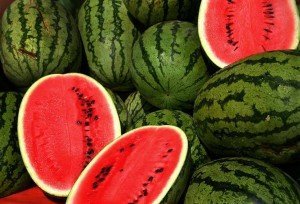 One day, I spotted an ad in the local paper for 50¢ watermelons—I was on a mission! When Jack got home for lunch, I rushed out with our only car to take advantage of this bargain.

A display of watermelons with a sign, “Watermelon $1.50,” greeted me at the front of the store. Bewildered, I showed the ad to a clerk. He replied, “I’m sorry, but we ran out of the 50¢ watermelons. Our new shipment is priced at $1.50.”

The store manager told me the same thing. I told him that I’d never shop there again and stormed out of the store. Even though everyone said it was a very nice store, I stuck to my guns. I remember Georgene teasing me that I was being foolish and should get over it.

Twenty-some years later, I took our daughter, Chris, to a ski race in Vermont. At the race, I met a Marketing VP from this store, which had become a national chain. While chatting with him, I explained, “I used to shop at your store and really liked it. I’m disappointed that you no longer have a store in La Crosse.” He looked at me with surprise, “We have two stores in La Crosse.” And he described the locations.

In a flash of memory, I recalled the watermelon story and shared it. He laughed and picked up our tab, “I think I should write off this trip! You just provided me with very meaningful market research. Not only did you stop shopping over a watermelon, but you also forgot our store existed. While I don’t have a watermelon to give you, at least let me buy you a drink!”

After that encounter, I opened my mind to shopping there again.