Jack threw himself into his new role as a chemistry professor. He loved teaching and was known for delivering passionate lectures. One of his colleagues, who taught in an adjacent classroom, complained that his own students listened more raptly to Jack than to him. Everything about chemistry fascinated Jack, and he pursued his laboratory research with the same zeal he took to the classroom.

The university community welcomed incoming faculty. I received an invitation to join the Campus Dames, a group for faculty wives. I’ll never forget my first meeting. After a brief, formal program, we had a chance to mingle and get acquainted. Scanning the room, I made eye contact with a pretty, friendly woman with a short, brunette hair style. Her face lit up with a radiant smile. I crossed the room and met, Georgene Schmidt, who would become one of my closest, lifelong friends. We really hit it off, Georgene and me!

Georgene grew up on a farm in Iowa, so we had a lot in common. She was such a nice person. Friendly, kind, and good natured. Her laugh was contagious. Georgene was a whiz in the kitchen. She could whip up a meal or a treat in minutes, all the while talking non-stop. We did everything together—all the simple things in our daily lives, like helping each other shampoo our rugs. She would give me perms and style my hair. Just like my mornings with Babe, we got together, drank coffee, chattered, and laughed. Our pleasant companionship made daily life lots of fun.

Jack hit it off with Georgene’s husband, Bill, too. As young professors starting out together, they had a lot in common. And they loved to pontificate about world events and campus politics—or just sit around and shoot the breeze! The two of them took fishing trips with a group of other young professors and got involved in a monthly sheepshead (poker) club. When he hosted, Jack liked to serve stinky foods like sardines and Lemberger cheese with Saltine crackers. We all plugged our noses when he set up for card club—pew!

There were a lot of university functions that we attended along with the Schmidts. I enjoyed being a part of the larger university community. Many people who we met those first years became our lifelong friends. Georgene and I joined a bridge club with university wives which continued until just a few years ago. I was a swift bridge player—good at counting the cards and keeping track of everyone’s moves. We picked up a lot of news and gossip during those bridge games. Georgene and I like to rehash it all later.

We also got to know the Schmidt’s three sons. Tom and David were older than our girls, but their younger son, Jim, was the same age as Barb. Once Jean started kindergarten, we hauled the two of them around while the older kids were in school, so Barb and Jim became pretty good pals. Barb and I had fun sharing our adventures with the family at dinner time. I think that Cindy and Jean might have been a little jealous that we were having fun while they worked hard at school.

We were lucky to find life-long friends in Babe and Bill Stewart when we moved to Spooner and doubly lucky to meet Georgene and Bill Schmidt within weeks of moving to La Crosse. 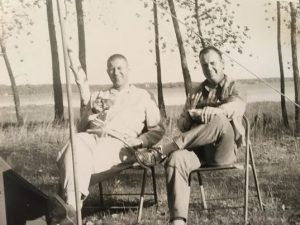 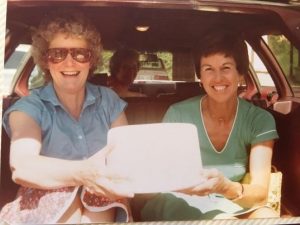 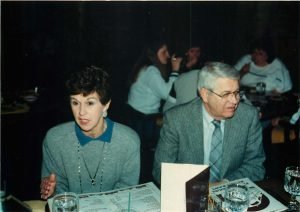