Learning the Ropes of Motherhood from Babe 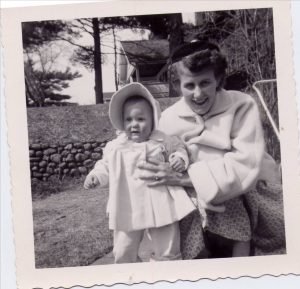 In November, Babe gave birth to their son, who they named William Wallace Stewart III, but called Billy. Our first daughter, Cindy was born on Mother’s Day in May 1954. Her arrival four weeks before her due date caught us completely off guard. Not only didn’t we have necessities like diapers, but we weren’t even sure where to go.

The Spooner Hospital had no maternity ward. So, our town’s GP, Doc Olson, had admitting privileges at both Rice Lake and Shell Lake Hospitals. On such short notice, we didn’t know where he was. Jack and I were practically hysterical. So, Babe rode along and steered us safely to Shell Lake, where we found Doc Olson—just in the nick of time. Our family still jokes that this was the only time Cindy ever arrived early!

As a no-nonsense, seasoned mother, Babe helped me learn the ropes of motherhood. Our babies grew up together and soon became best buddies (they called themselves the “gruffers,” an imaginary animal that burrowed under pillows and couch cushions).

Not long after Cindy’s birth, I joined Babe and other moms to mobilize the Ladies’ Auxiliary to raise money for a maternity ward in Spooner. We succeeded, and the new facility was open by the time I had Jean two years later.

On a stormy night on Halloween Eve, I left a church meeting with my friend, Dorothy. While she drove me home, my labor started. A blinding rain pelted the car and it was hard to see the road. Dorothy missed the turn onto our street and ended up in the high school parking lot. She drove around in circles trying to find the exit. As my labor pains intensified, I became nervous that I would give birth in her car! Eventually, she got me home, and Jack took me to the Spooner Hospital. Just as we entered the hospital, the lights went out. Since the new maternity ward was equipped with an auxiliary generator, they managed to bring the lights back on—just before Jean was born! She always loved to have me tell this story. And to this day, Jean loves Halloween. 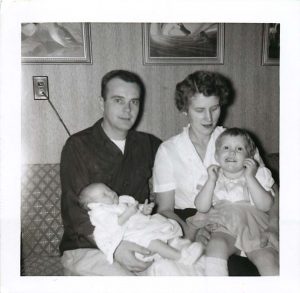 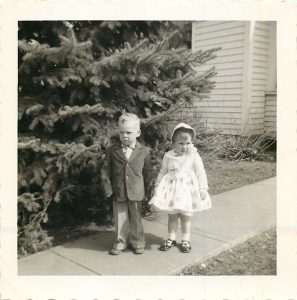 The Gruffers All Dressed Up 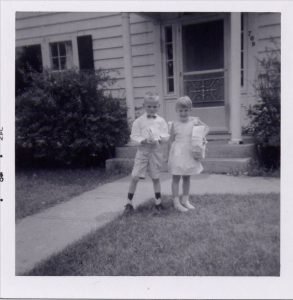 The Gruffers Go to a Birthday Party 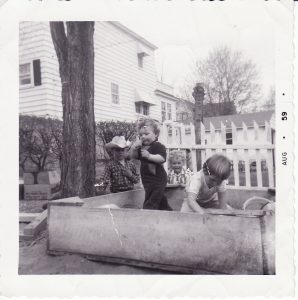