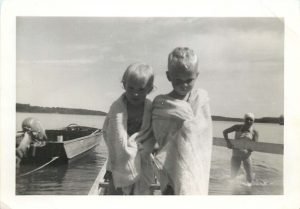 Cindy and Billy on Stewart’s dock

During the summers, Jack worked for the Highway Commission surveying the highway projects in northern Wisconsin. Stewart’s had a cabin on the Middle Eau Claire Lake, about an hour away from Spooner. They’d invite us to join them and we had so much fun.

We hung out all day on the beach. Jack tossed the Stewart girls around in the water. Everyone water skied—they even got me up on skis once! In the evenings, we had big campfires where Jack and Bill entertained a crowd by leading sing-alongs. Every once in a while, Babe took center stage and crooned, “I’m Only a Bird in a Gilded Cage.” She never failed to crack us up.

One summer when Cindy and Jean were little, we spent a week at Stewart’s cabin. When I packed for that week, I didn’t know I’d end up staying the whole summer. It happened like this … when it came time for Jack and me to depart on Sunday evening, no one wanted the weekend to end. Bill and Jack needed to go back to Spooner to work, but Babe (who didn’t like to be alone) convinced me to stay with her. Jack and Bill returned the next weekend and when Sunday came around, once again, the Stewarts convinced me to stay. This happened for several weeks until the summer was almost over.

It was an easy way to parent. Our life centered around the beach, so I dressed the girls in bathing suits and terry cloth beach robes. Sometimes I put them in shorts and t-shirts or sunsuit rompers. We generally had a pancake breakfast and sometimes we went berry picking in the mornings. After lunch of sandwiches and cold cuts, we insisted on a mandatory one-hour nap for the kids. Then we spent the rest of the day on the beach. On the weekend when more people came out, we had big fish fry feasts with Babe’s various Jello salad concoctions.

We lived by Babe’s Cabin Rules:

Another summer, we rented a cabin on Clam Lake in a remote area of the Chequamegon National Forest. I remember a dramatic event one day when Cindy and Jean were napping (maybe, I was too). I heard a commotion on our front porch and went to the door, thinking I had company. Instead, I found myself face to face with a standing black bear. I screamed and the bear ran away. That bear really shook me up!

Another near-miss happened when we were out on the dock and 18-month-old Jean fell in the water. Fortunately, both girls were wearing life jackets, and Cindy reacted quickly. She grabbed Jean’s life jacket and held onto her until I could get there. It was probably less than a minute before I fetched Jean from the water, but one of the longest minutes of my life. We always told Cindy that she was very brave for saving her sister’s life. Water safety was something we instilled in our kids.

Because of Stewarts, we fell in love with lake life and became especially fond of the Eau Claire Lakes north of Hayward. 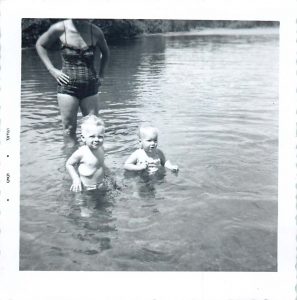 Billy & Cindy with Babe watching them 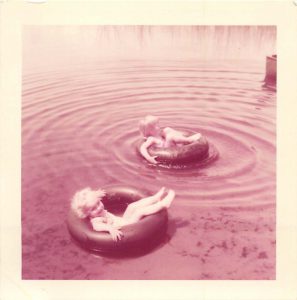 Jean & Cindy floating in the shallows 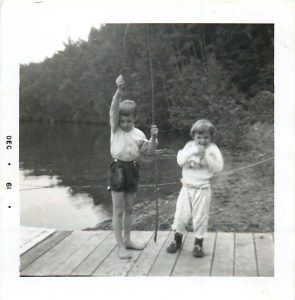 Cindy and Barb on the dock 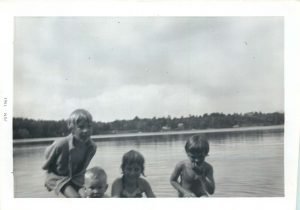