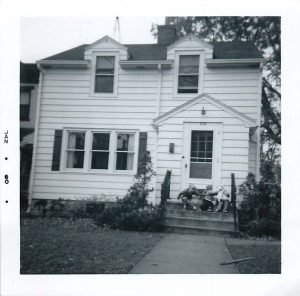 The fall of 1959, we moved to La Crosse so Jack could embark on his new career as a chemistry professor at UW-La Crosse. As much as I didn’t want to move again, La Crosse ended up being where we put down roots. And the rest of my life stems from this decision. We became part of a network of communities associated with UW-La Crosse, St. Paul’s Lutheran Church, Greenwald Coulee, Mt. La Crosse, and our kids’ friends and activities. Many other friendships grew from these connections. But let’s start at the beginning …

We bought a cute, little house on 10th Street (between Cass and King Streets). The neighborhood reminded us of our first home in Eau Claire. Plus, it was about a mile from the university. Since we only had one car, I drop pedJack off or he walked.

The girls shared a bedroom that extended the entire front of the house on the second floor. There was space for two twin beds and a full-size bed, so each girl had her own bed—less opportunity for bedtime bickering. They liked to have us sing, “Goodnight Ladies” as part of their bedtime routine—it was probably the only time in my life that people liked to hear me sing! 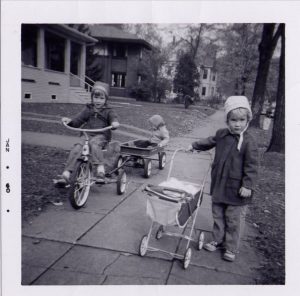 Our basement had an open space that we turned into a playroom for the girls. At times it looked like a bomb went off down there. I’d have to get after them to tidy up. When they were lazy, I’d put my foot down and threaten to throw their toys away. Sometimes, Barb would hustle around and put her older sisters to shame cleaning up. That competitive pressure helped the other two get into gear.

The basement also had a small apartment (not up to current-day, egress standards) with a kitchenette, bathroom, and bedroom. We rented the space to a parade of college students, which offset our cost of living. The university was committed to building connections between faculty and students, so they facilitated these matches. Some of our boarders were star athletes and went on to do great things. They also helped us out with the girls a bit.