I Don’t Care What that “Jack Storlie” Says 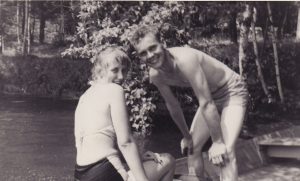 Jack Storlie worked in a gas station where Clarence and his buddies liked to hang out. Clarence would come home and carry-on about all the jokes that Jack told. He hero worshipped Jack, and it was so annoying … I’d roll my eyes and say, “I don’t care what that Jack Storlie says. It’s not funny!”

One day, I was in the truck with my dad, and we drove past the Storlie Farm. I saw Jack working out in the field and thought he was really cute. So, I threw my arm (and head) out the window to wave at him. Later, when Jack came to our farm for a visit, Clarence was surprised to discover that Jack was actually interested in meeting me. We started dating when I was 15 or 16.

About a year after we started dating, Jack quit high school to join the Navy toward the end of WWII. He couldn’t wait to turn 17 so he could enlist and help the war cause. I was only 16 when he left. It was scary to see him go to war and be so far away. I wrote to him every week. He did his basic training at the Great Lakes base then deported out of San Diego on the S.S. Sibak into the Pacific Theater.

He was in one encounter with the Japanese and endured some rough seas, but the war ended shortly after he joined. It was such a relief when I knew he was safe. He completed his tour of duty in California helping to decommission ships that were no longer needed and came home two years after enlisting. During his time away, we became even closer and dreamed of sharing our life together.

I think that maybe the joke was on me! 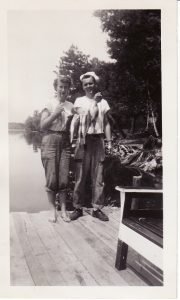 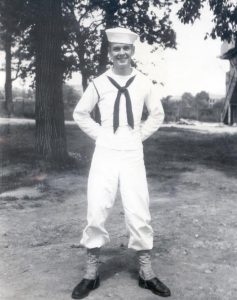 Posted in 2-Spreading My Wings