Goofing Around with Grandpa Clarence 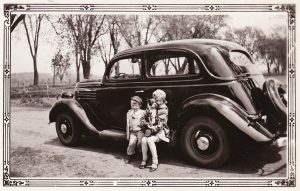 I really liked growing up on the farm. It was a simple life, but my dad and grandpa were big teases. They stirred up trouble and kept me on my toes!

Grandpa Clarence had a big roll-top desk where he locked up all his important papers. My brother, Clarence, and I knew that he also kept his candy there. So, we begged for a treat every time he sat down to work. He showed us the candy, then put a piece in his mouth and talked about how good it tasted. While our mouths watered in anticipation of getting a treat, he made a big to-do about locking up the candy. We’d moan and groan until Grandpa opened his desk and gave us each a piece. Egging us on, he helped himself to another piece, then locked the candy in his desk. Eventually, he made it even. We loved to play this game … over and over again.

Clarence was a gentleman farmer who served on a lot of county boards and committees. He drove a ’28 Chevy all over Eau Claire County. He often took Clarence and me to town with him. We got all dressed up and ready to go. Then he strolled out, waved to us, hopped in his car, and drove away. We chased dafter him, running and hollering, “Wait for us!” He stopped down road. Just when we reached the car, he moved forward again so we had to keep running. This would repeat several times until we tumbled into the car down by the schoolhouse. Our adventures to town always started with a good laugh. 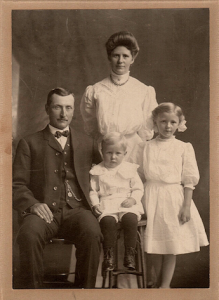 He visited the co-op where lots of men gathered. There was always a group sitting around, shooting the breeze. Grandpa like to exchange news with them about farming and goings-on around the county. Clarence and I got to join them. Clarence was a little shy, but I wasn’t afraid of talking to anyone. I became the lead talker. Some of the men got a kick out of me and asked me a lot of questions. Once I got in trouble for saying, “shit,” which I learned from listening to them.

Grandpa also picked up supplies. When he was paying, he’d tell the clerk, “Throw in a couple of pieces of candy for Lois and Clarence.” Occasionally, we’d get an ice cream cone. It was such a treat to go to town with him.

He kept a ledger in his roll-top desk where he entered all the income and expenses for the farm. Many years ago, I was going through my parent’s papers and came across that ledger. It warmed my heart to see multiple entries in his handwriting: “2¢ Candy for Lois.”

Grandpa Clarence was the second generation of Spragues to farm that land. His father, George Asa Sprague, settled in Eau Claire after his first wife and 10-month-old son died from the influenza. They lived in Upstate NY he worked on building the rapidly-expanding railroads that connected the NYC port to the Erie Canal. A year after his wife and son died, he abandoned his home in New York and traveled west by ferries, trains, and foot. He settled in Eau Claire, where built a ferry to transport people across the Chippewa Rive. Eventually, my great-grandpa bought the farmstead where I was raised. (Jean researched his life and wrote about it, if you want to read more.)

I don’t remember much about my great grandpa. But my memory is that he was a sullen, quiet, and sharp-tongued man. I was sort of afraid of him when I was little, but now I imagine that whatever tragedy he suffered in New York hung over him like a dark cloud. But whatever the reason, he was very different than my good-natured, big-hearted Grandpa Clarence—who I hero-worshipped.

Posted in 1-Growing Up on a Farm