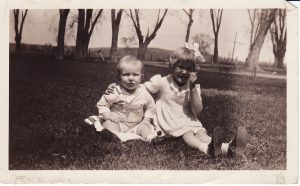 “Brother” (which became his nickname) was born when I was four. And I could count on him to play along with my games.

Clarence wrote a funny story about me a few years ago. It pretty much sums up our childhood relationship:

“Lois was impressed with the authority of her teacher at our one-room school. She would come home, line up her small chairs and put dolls on them. She even put doll-clothes on our household cats.

By the time I was three years old, she had placed me in the front row. She had flash cards, and the first one to answer correctly was handed the card. At the end of the game, the cards were counted for each doll and cat and little brother. Needless to say, the dolls were mute, and the cats often ran away from school, so I did not have much competition. I do not recall enjoying this very much, but it seemed as though I did not have any choice in the matter.”

“I can see Lois did a good thing for me … I entered first grade when I was four years old and could already read and do simple addition and subtraction. But those cats were not impressed with Lois and simply refused to apply themselves to schoolwork.” 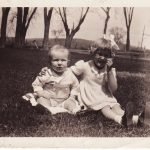 Baby Clarence and me 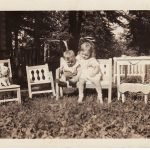 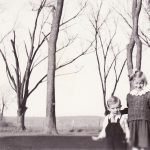 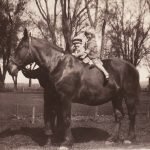 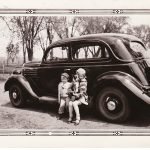 Dressed up waiting for Grandpa

Posted in 1-Growing Up on a Farm